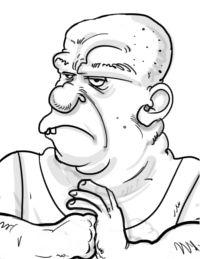 You have been sent here because you have made a really basic mistake in your logic.

It is a mistake that would be understandable in a dog, a cow, a fish or even one of the slightly dumber monkeys – but not in an intelligent human being.

You confused ‘correlation’ with ‘causality’ – which your better educated peers may know as the ‘Post hoc Ergo Propter Hoc’ fallacy (roughly translated as ‘It happened after, so it was caused by’)

Just because one thing happens, and then another happens sometime soon after does NOT mean that the first caused the second. Amongst other possibilities, they could be unrelated, or they could both have the same ‘third event’ as their cause.

Indeed, if you have confused yourself with too much advanced physics, or are a keen fan of ‘Doctor Who’, maybe the second event caused the first (best not to rely on this option in your argument though, it looks like you are in enough trouble already).

In the animal kingdom, such simplified ’cause and effect’ thinking is useful, e.g. ‘I ate those red berries and soon after I was sick – best not eat those berries again’. That is a sensible precaution, and could even be said to apply to some human situations. Eat at a new restaurant, get sick after, avoid the restaurant.

However, this is not ‘proof’, it is just speculation followed by a sensible risk avoidance strategy.

Most fully developed adult humans have learned to differentiate between the two when constructing an argument.

Even if your original argument was correct, you have shown that you have a poor grasp of logic.

NB.  If your protagonist tries to claim that your original argument is wrong purely because of your ignorance, and not because of the merits of his own argument, then you can get your revenge by pointing them to the ‘Ad Hominem‘ fallacy page.