You Are a Bl**dy Weirdo! 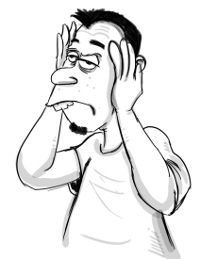 Before we start analysing your error, just calm down a little.

We weren’t being rude when we called you a ‘weirdo’ – it is key to the mistake you have just made, and the reason you have been sent here in the (perhaps forlorn) hope that your ignorance might be diminished.

What you have just fallen victim to is known as the ‘false consensus fallacy‘. It doesn’t mean you are stupid, (that is probably just a coincidence), but it does mean that you have made a fool of yourself.

Here is the mistake you made explained in simple terms:

You came to a conclusion that was based on the misguided belief that most people have the same views, beliefs, motives, likes and dislikes as you do. This is wrong because you are a weirdo. In fact, almost everyone is a weirdo in some way, and that is the point. Most people tend to underestimate the differences between themselves and everyone else. Stupid people tend to do it more than most.

Do you see where you went wrong now?

The only question that remains is whether you are still an ignorant weirdo or are now a better educated weirdo.