If You Can’t Prove Me Wrong, then I Must be Right 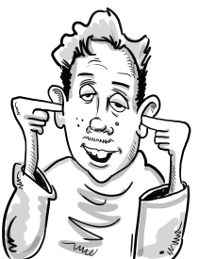 Oh Dear! If someone has pointed you to this page, then they think you have done something alarmingly stupid.

If they were a friend, then they may have pointed you here to improve your understanding and increase your debating skills, but more likely they just wanted you to realise how much of a twit you have been.

What you did was try to win an argument using confused thinking, and probably made yourself look a bit foolish to anyone unfortunate enough to witness your crude and unsubtle attempts at rhetoric. They have probably clicked the link as well, and are now reading this and having a chuckle at your expense.

However, all is not lost. We will try to help you avoid embarrassing yourself in future by explaining the mistake you have made. Of course, it is far more likely that this will go clean over your head, but lets give it a try, eh?

Your argument is based on one of the most basic logical fallacies, known to educated people as ‘Argumentum Ad Ignorantiam’, sometimes translated as ‘an appeal to ignorance’.

Here is what has happened, either:

This is a silly way to argue, and if you now understand why (which we doubt), then you must be feeling pretty foolish.

Should you still be struggling with the concept, here are a few examples that may help you.

Example 1.
There is no evidence that God exists, therefore there is NO God

Example 2.
Nobody can prove that God does not exist, therefore there IS a God.

Does that help at all?

Both these examples make the same mistake that you have made – you cannot use the ‘absence of evidence’ supporting one position as if it were definitive evidence supporting the contrary position.

This line of reasoning is wrong because it ignores the third option, which is that there is evidence out there which has not yet been discovered, or of which your protaganist is unaware, which may prove you wrong (or even right, of course). Even if everything else you have said in your argument is logical and true, if you depend on this reasoning for your main point, then your case is still unproven.

Here is another example:

We have seen no evidence of your intelligence, therefore you are stupid.